A selection is a collection of nodes, groups, ports and edges (zero or more of each), upon which operations can be made that affect the entire set at once.

You can work with these in one of two ways - either use the current selection associated with an instance of the Toolkit, or create an ad-hoc selection.

The principal methods for working with the current selection are:

Set the current selection. Here, obj can take a number of forms:

Add something to the current selection. Here, obj can take a number of forms:

A helper method to get a path (see here) and add it to the current selection.

Remove something from the current selection. Valid values for obj are the same as for the addToSelection and setSelection methods.

Get the current selection. This returns a Selection, which is a selector-like object that offers a number of methods for performing operations on the selection as a whole.

Clears the current selection. This method is analogous to calling getSelection().clear().

If you are working with hierarchical data, you can use the Toolkit to get a list of descendants of some vertex (and, optionally, the edges to and from each vertex):

The return value is a Selection, with all of the methods discussed above available. By default this selection does not include the focus node or any edges, but the method signature is as follows:

Selects all descendants of some Node or Group, and, optionally, the Node/Group itself.

So this call would return all of a vertex's descendants plus the vertex itself:

And this would get the descendants, the node itself, and any edges connecting the nodes in the set:

In addition to the current selection, you can also select a set of vertices and/or edges on an adhoc basis:

Here, obj can be some node/group/port/edge, or the ID of some node, group or port, or an array of a combination of these.

A more powerful method to use to get a set of objects is filter, which, as the name suggests, can filter the contents of some Toolkit instance according to a few criteria. There are two ways to call this method.

Filtering with a function#

You can pass a Function as argument to the filter method, which is expected to return true to indicate that a given object should be included:

Note here that this function is given every object managed by the Toolkit instance - meaning all groups, nodes and edges. So you can use objectType to test if the object is a node or an edge. In this simple example we have simply returned all the nodes in the Toolkit instance.

Another example of using a function:

Here we return only nodes whose maxValue is less than 150.

Filtering with a match object#

Alternatively, you can pass a match object in to the filter method:

You can match an arbitrary number of values:

Here we get vertices with a maxValue of 150 and a lorem of "ipsum".

Partial matches with a match object#

You can instruct the Toolkit that an object that matches at least one entry in the match object should be included in the output (by default, every value must match):

...by passing in true as the second argument to the filter function. So in this example we now get vertices that have a maxValue of 150 and/or a lorem of "ipsum".

Selecting objects with the mouse#

The Surface operates in one of two modes:

The default mode, in which the mouse is used to pan the UI and support click events etc.

To use the lasso selection you have to import the @jsplumbtoolkit/browser-ui-plugin-lasso and configure the lasso plugin on your surface. See the plugin documentation for more details.

By default, the lasso draws an element on screen that indicates the selected area: 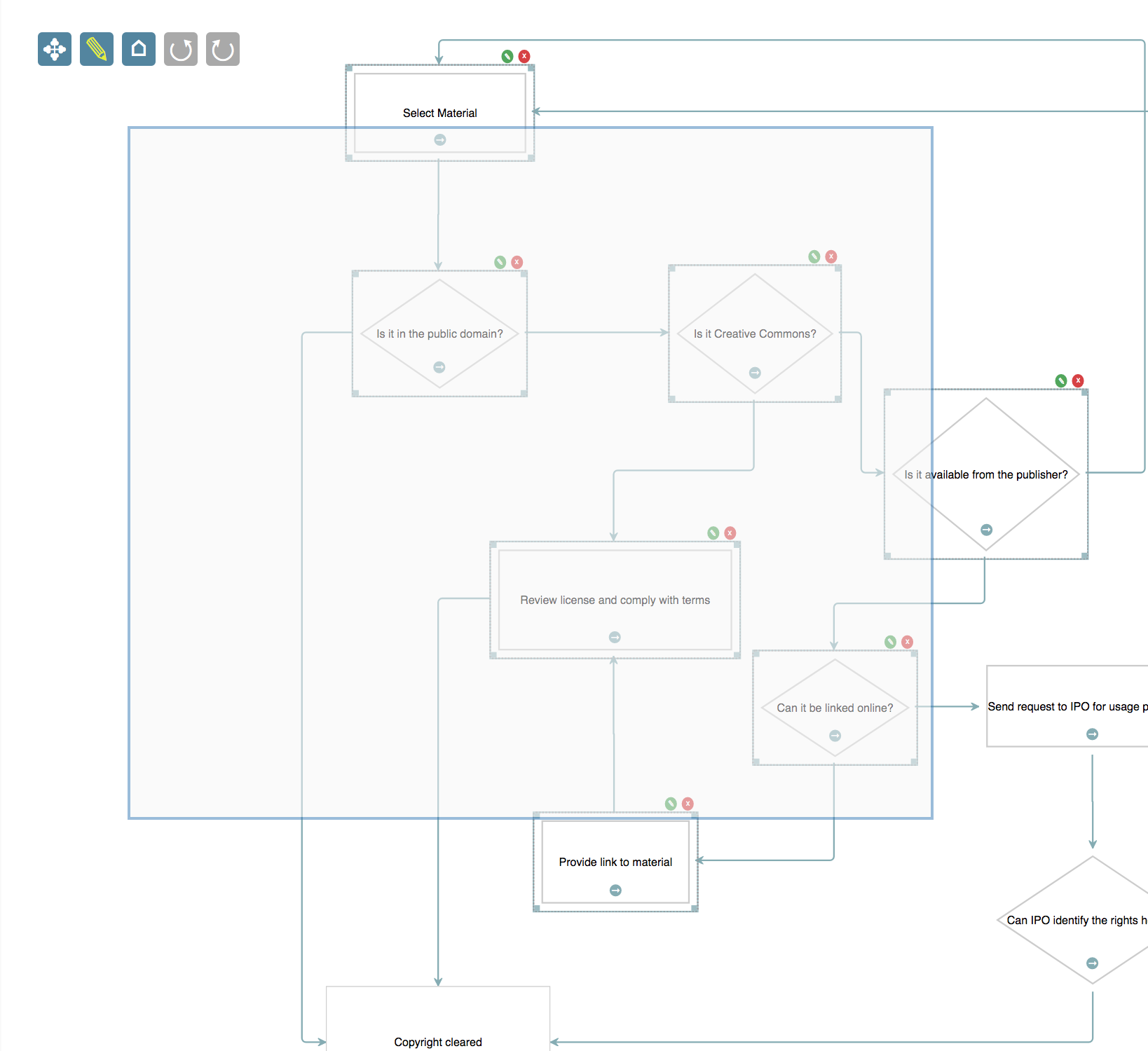 You can also run the lasso in 'inverted' mode: 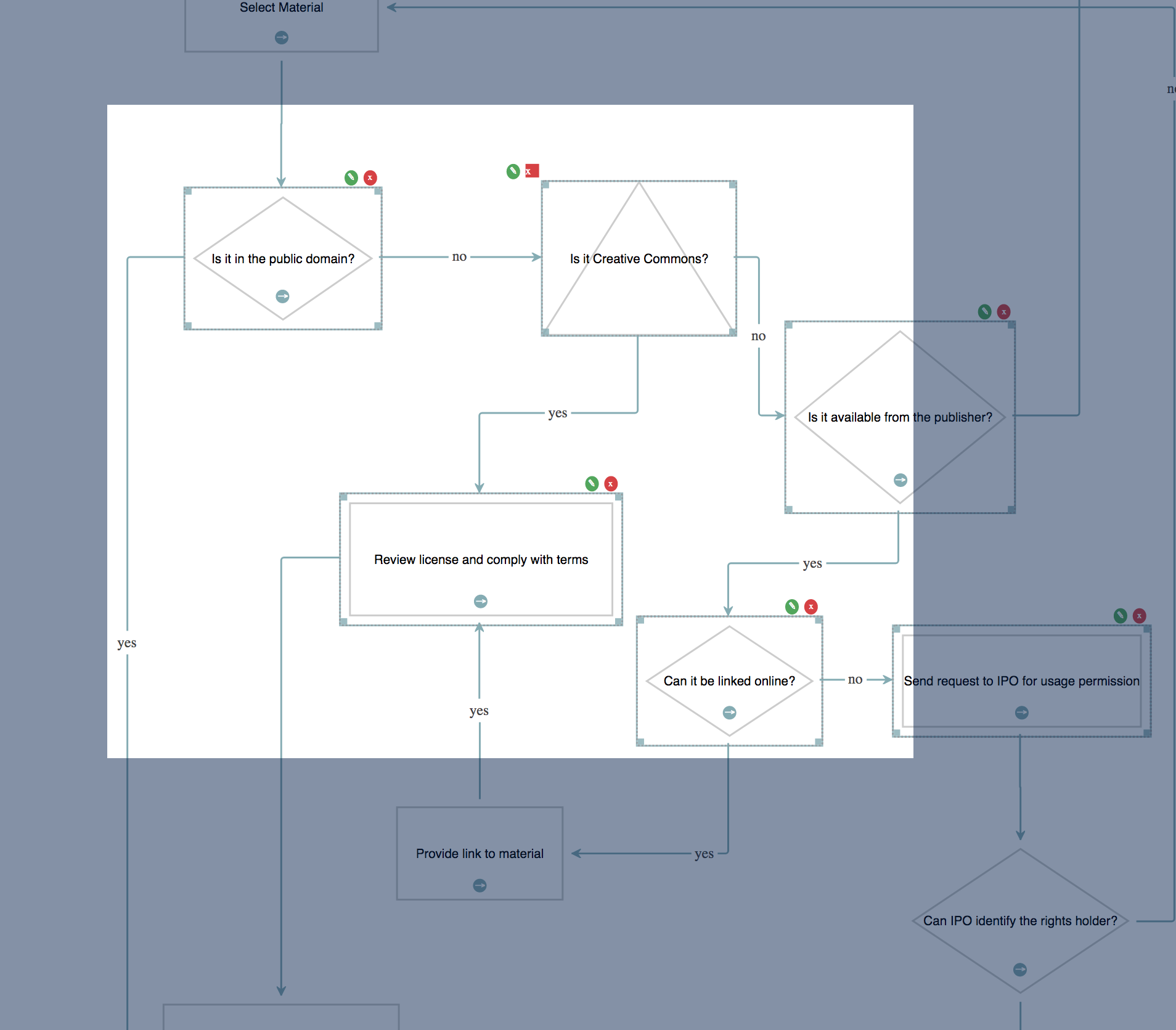 To do this, you must set a flag on the lasso plugin's options:

You can provide a list of classes that indicate elements upon which a mousedown should not launch the lasso:

This example is from the Hierarchical layout demo that ships with the Toolkit.

Removing everything in a selection#

This is a fairly common use case when working with a selection:

You can append selections to each other:

This is perhaps a spurious example. But you get the idea.

You can limit the number of group, nodes and/or edges in a selection or Toolkit instance's currentSelection. This can be useful in a few ways: maybe your app wants to enforce that only one node is selected at any point in time, for instance. Or maybe you want to maintain a selection queue of fixed size for some purpose.

You can provide constructor parameters to control this behaviour:

Here we have specified that at most 1 node, 1 group and 1 edge may be selected, and that when the user tries to add a new node or edge to the current selection, it should be discarded. The other option - the default option - for selectionCapacityPolicy is Selection.DISCARD_EXISTING, which takes the 0th element from the underlying list.

You can also control these values with setter methods:

To set limits and control the capacity policy of an ad-hoc selection, these methods are available:

Once you have a selection, you can instruct a surface to hide/show the entire selection at once:

Here we assume the existence of a Toolkit called tk and a Surface called surface.